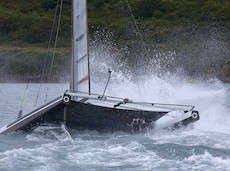 Mylor Harbour, UK (24 September 2013) – Under steely grey skies and howling winds on Monday, Franck Cammas and Louis Viat on Groupama C dominated the fleet on the first full day of racing for the 2013 International C-Class Catamaran Championship. More than half the fleet suffered damage of some kind, though most will return Tuesday stronger than before.