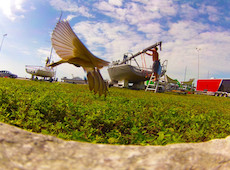 People often ask, “How do you decide what music to use in your videos?” I always reply with the same answer, “It’s the hardest part of the edit, and sometimes it just happens.” I pick tracks that fit the pace of the edit, and I pick tracks that don’t blow. Take this for example, I had no plans on cutting a time-lapse video but I was rocking out to this track last week and I thought, “ Ya know…this would be a bomb ass song to use for some time-lapse footage.” So I stared digging through all of the hard drives I had with me on this trip to see what archived stuff I could find. And luckily for my creative mojo I had this much. I had much more to use , but I couldn’t wait to chop it all up.

I will never grow tired of time-lapse video, there are always killer opportunities to capture  amazing visuals, I could watch clouds forming and rolling by all day it seems, sunrises, sunsets, all of it. I often set up cameras on the boats to record in time-lapse mode to maximize battery and card space. Lord knows asking a sailor to remember to turn on the camera before the start is hard enough, let alone asking them to turn it off between races then restart it again. This way I know I get something at the end of the day instead of it being a total waste.  And often times,  if you scrub through all of the footage you find some really cool shots. For instance, the cover shot, I set up a camera to record Inga from Sweden de-rigging after KWRW. What I found after looking was the sick shot of the bird swooping into the frame. I absolutely love that shot. You can get some killer moments onboard as well, like this shot below. I can’t remember who lost their lid here but the click of the camera caught it perfectly before it was lost overboard. I think it may have been Lindsay’s, but I’m sure she blamed me for knocking it off somehow. Just kidding Lindsay:) 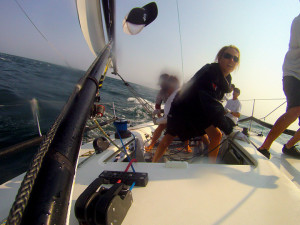 So, sit back and enjoy a badass track and some really great random time-lapse footage from the hard drives stashed in my backpack.

Let Me Do My Thang – Thank You Crystal Method for the Inspirado.